Overflows.
The latest Mississippi River floods – the worst since 1927 – have forced the U.S. authorities drastic measures to protect large urban centers, like the city of New Orleans. Radical action in which he found the opening of the Atchafalaya River levee within which highlights the Morganza levee (Louisiana), an infrastructure that would not open since the floods of 1973. This critical decision – which meant flooding an area of ​​7,700 square kilometers, affecting some 11,000 buildings and 25,000 people – was carried out by the Corps of Engineers U.S. Army to the catastrophic consequences caused by Hurricane Katrina in 2008, disaster that flooded 80% of New Orleans and killed 1,500 people.

The dam and the Bulldozer.
On 19 May dailymail.co.uk newspaper published a series of photographs recording the efforts of the inhabitants of the town of Vicksburg to stop water from the Yazoo River, a tributary of the Mississippi River source.
Using heavy machinery, farmers have protected their property by building a series of trenches. Tons of dirt and sandbags surrounding houses, protecting both its residents and property. Protection that does not reach the hundreds of hectares lost in the floodwaters of the Mississippi. 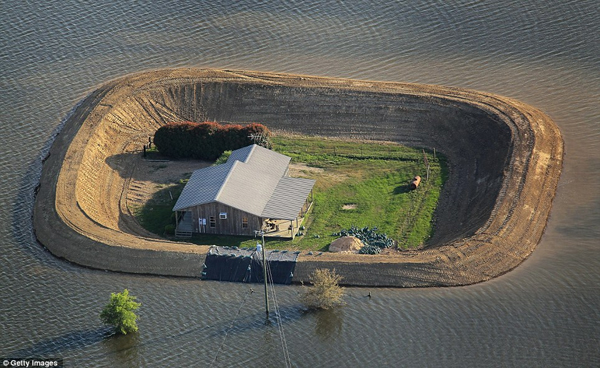 The dam – a technology that dates from the dawn of humanity – is used to define a security zone, which in these cases coincides with the garden, natural environment that specifically domesticated. Thus within these real islands have become the homes of Vicksburg, the disaster has not entirely erased those signals most characteristic of American garden, as is the area of ​​manicured lawns surrounding the house. The garden behind the dam wall thus becomes a landscape of security, a vital distance and thickness, sharing place with everyday objects that have been forgotten here: umbrellas, swimming pools, gardens, toys, all the light objects emergency – and behind the dam – are weak relationships between them and the meanings that are often awarded to them.
However, despite the visual results that reach the levees, we should not lose sight that these technologies are activated responsive only by the disaster. This is a contingency of flood disaster which validates a reactive landscape. While the emergency lasts reactive landscape is the dam is evaluated in terms of its effectiveness as a mediator and controller of the dominating entropy catastrophe. Their resistance, sealing, and their speed of construction are some factors to control their design. Once the waters have been removed – and the disappearance of the risk of disaster – lis dams lose their character to become responsive only cubic meters of accumulated dirt.

Responsive technologies and gardens of war.

The photographer Loomis Dean at the February 1951 edition of LIFE magazine, published a series of photographs which recorded the construction of a series of bomb shelters deployed in typical American suburban gardens. These were the years of the Cold War, where the threat of global nuclear catastrophe was in the nightmares of most Americans. The garden – in the photographs of Dean – was turned by the imminence of the catastrophe. A number of technologies highly responsive trigger this space was home and back yard of suburban houses in an area of ​​security.

Technologies that were funded by the Civil Defense Program, whose construction was carried out by private contractors. The “Backyard Bomb Shelter” was pure responsive technology. With a number of artifacts that sought to replicate the domestic life that was left above, sought refuge in the garden to work from the normal. The shelter in this way was only activated by the disaster. Until then, I could live with everyday. Along the terrace furniture, air-raid shelter of the garden gave him hope of survival. As a life jacket or parachute – other technologies responsive – the shelter to the garden a safe environment, an atmosphere of contention before the solvent power of entropy that brings disaster. The garden was well – for the America of the early 50 – in the first trench from where they rid the Third World War.

Reactive Landscapes.
Lewis Mumford often said that one of the main features that characterize the entire architecture is its ability to affect the human environment. Buildings, a road, a city, are all expressions of how humanity finds a way to adapt the living environment. Thus understood, the whole architecture – and the technologies that make it possible – would be reactivated to conditions identified as hostile to sustain human life. A unit of the architecture – understood primarily as an environment that enables human life – so almost complete when the disaster occurs. An instance where the test architecture to capacity – and disability as well – of control over the entropy overwhelmed that, like Pandora’s box, releasing the disaster.
Thus, an architecture strip in its monitoring of the disaster, you can change not only as the object, but to go further and also transform their environment. The atmosphere and modified – in response to the disaster and to the definition of an environment mercy for human life – is that it is capable of producing a very special type of landscape: the reactive landscape. One type of scenario that is produced by a variety of instruments, tools and technology responsibly. A landscape that is activated only during the disaster. A landscape that works from the control of entropy, the degrees of security. Produced a landscape that is available, highly efficient for the same thing to choose the means by which it is built. A scenario where aesthetic appreciation is suspended in the hours-long emergency, replaced by other very human emotions as well, security and tranquility.

Reactive Landscapes are therefore not to be admired; although like any other architecture has its own formalization and plastic. Reactive Landscapes always act resistance, their work is opposition. They do not seek any kind of mimesis, but rather have a violent action viewed as hostile in nature, as an enemy. Its color is green, but gray is the result of all the colors of the media, devices and technologies used.
The Reactive Landscape is preferably from the air, from the perspective of who is out of the disaster. An approach that links the reactive landscape forms with some of the artistic trends of the late 60 read the environment and territory. The reactive landscape is therefore pure experience, pure state. Is transformation, modification, alteration, movement, accumulation. The reactive landscape is anonymous, is generated from and to the community. In reactive landscape, the plan is replaced by the strategy; decisions therefore tend to walk to work. Their logic is the battlefield.

In the current redefinition is taking place around the scope of the architecture in a world in which the disaster – ecological, military, humanitarian – is setting the global agenda is the need to include in the discussion to products all this kind of responsive technologies. The reactive landscape therefore is the last stop where the architecture – and according to Mumford – adjust your environment to support that ultimately matters: the life of man. VKPK.