Politics of the blurring and disappearance: Google Street View and Microsoft Street Slide, within the limits of privacy. By: Gonzalo Pedro Carrasco Purull + Livni.

The Geek- Panopticon: Foucault 2.0.
250,000 Germans sought to alter the recorded images for the new platform for Google-Maps: Google Street View. A similar situation occurred in Switzerland and France, where the implementation of this new tool – which offers a photo tour with 360 degree views of streets in major cities on the planet – is causing strong protests from citizens who feel that their privacy has been violated. And the cameras of Google Street View capture almost everything: faces, houses, traffic accidents, crime, and sex in public, in a total panoptic experience.
Google launched by the company in 2007, Street View in its infancy was implemented in only five U.S. cities. Currently, Street View not only records the entire U.S. territory, but has spread to different latitudes. Europe, Latin America and to Antarctica have not escaped the cameras of Google-Maps. An event which since 2009 has generated its mirror image on the part of Microsoft, has released Microsoft Street Slide. A system that has recently arrived in the European continent, choosing London as the first to register.
What it offers Google Street View, is essentially the ability to generate from the street views of 360 degrees horizontal and 290 degrees vertically. For this special cameras were developed for the pictures and link them together, positioning using GPS technology equipment.
In the beginning Google Street View cameras installed on their trucks, which routinely roamed the streets of cities. However, while the system is developed, was the need for more versatile means of transport where the images were captured. Thus, the vans were replaced by small city-car, even the use of tricycles – or “Trike” – a means by which Google Street View has been able to reach difficult access scenarios, such as national parks, hiking trails or university campus. 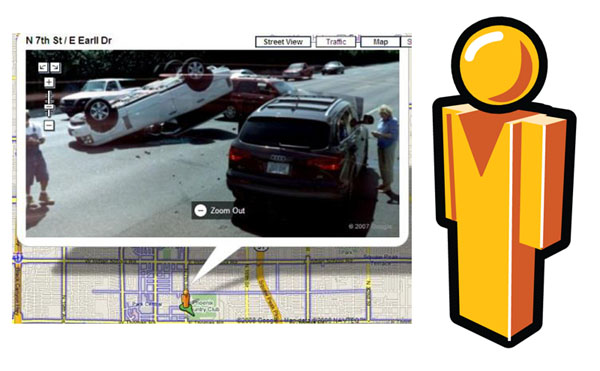 Pegman is the name of the man yellow pointer serves to choose from a specific map, the point of view from which you want to get the overview. Its name derives from the word “clothes peg”.
This kind of model has been manufactured in a giant version and distributed through the streets of cities during the process of taking photos. Strangely, Pegman has no eyes, only fringe suggests a mouth. A controller without the possibility of vision, or discrimination of what is before him.
This lack of discrimination observed is what has triggered major protests of citizens. Because – and although the process of “freezing” of each of the pictures taken – they may be edited. The amount of information handled becomes almost impossible to control what is recorded. Thus, after the release of Google Street View in Brazil, reported the registration of corpses in one of the images available, victims of a gang dispute occurred when getting the photographs.

A blurry world.
In a world dominated by high definition – HD culture – the strategy chosen by Google Street View has been to implement a technology that makes blurry hands and faces of people who have been registered. As well as houses and entire buildings – which in the opinion of its inhabitants, when publishing these images – a violation of their right to privacy.
While Google has defended argued that the space where the photographs are made exclusively public is also true that – as has been reported recently – it is possible to hack the IP address of the personal computer and linked to the position which gives Google Street View. Making it a potential global platform of harassment of people.
Just make a request through Google Street View for the company to make blurred or property the person whose privacy has been considered vulnerable. However, the strong resistance that this program has been mainly in some European countries, has cast a pall of uncertainty over the future of the project. Opening the possibility of a scenario in which the program can offer only a blurry world that refuses to be photographed. Redefining the way the concept of public street is a scenario that becomes suspect to other records such as tourist photography or surveillance camera.
Thus the boundary between the private and the public has acquired a diffuse thick. An area of ​​low definition of smudge, blur.

Overwritten, a political act.
John Azzarello is one of the most interesting artists on the contemporary scene, producing artistic framed within what is known as digital art. Using digital tools, Azzarello has overwritten part of American history from your laptop. Using deletion strategy has handled some of the most important photographs of American popular culture in a period of estrangement, strongly political. Throughout this month, returned to the places and scenes that served as background to events, sometimes violent, to a state of apparent neutrality.
Azzarello is how handled in his work “Untitled # 15 (Tank Man) 2006, the famous photograph of the Chinese protester standing in front of the tank column, that fateful day of June 1989 in Tiananmen Square. Or in his work “Untitled # 28 (EC 133-B), 2006,” in which removes the weapon from the hands of H. L. Oswald, one of the key photos in his impeachment by the assassination of President Kennedy.
What is evident in the work of Azzarello is the politically charged acquired by the exercise – in principle innocent – the deletion. Because at a time when the image is perhaps – and as Baudrillard tested with images of the first Gulf War – the only way to check reality. It thus appears as deleting one of the main tools for over-writing of history. An operation where the facts are supplanted by the absent, vacant, which is no more, which never happened, leaving no trace. 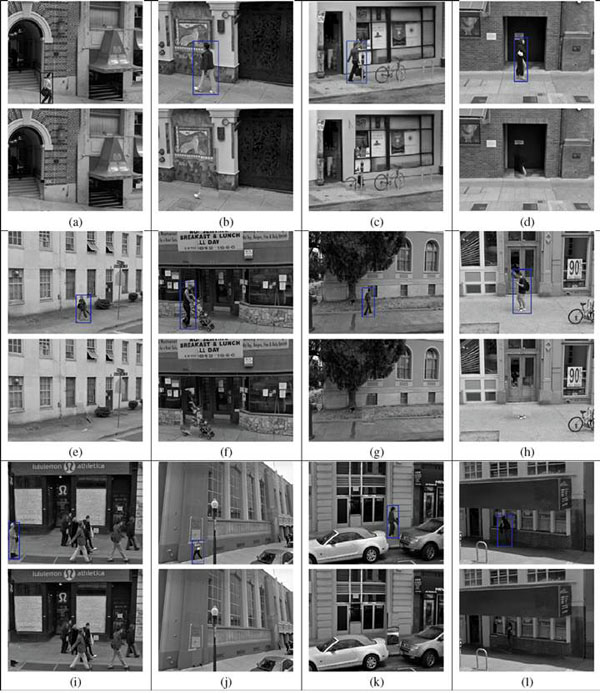 Recently – in June 2010 – Arturo Flores academics and Serge Belognie presented at the IEEE International Workshop on Mobile Vision, a tool that allows people to completely remove or buildings that appear on Google Street View (http://tinyurl. com/4xpegtq). Tool that would solve the main problems that Google has had to respond to the protests over invasion of privacy. Thus expanding the operation of over-writing of the public not only to build a city blurred, but a city over-written.
While the scene-cool about architects surrendered to the allure of the latest gadgets that a Steve Jobs launches welcomes the implementation of a new rendering platform like Google Street View. Cannot be ignored the profound redefinition of the media is taking place on our experience of public space, what is considered private, what he admits to being recorded and reported, the degree of vulnerability which allow almost unlimited access to information of our cities.
On the other hand, the responses to the demands of citizens defending their legitimate right to privacy, open conjecture of no fewer complexes. Because the ability to manipulate – again blurred, disappearing – the city’s public records also leads to possible overwriting of reality. Constitute a profoundly political; a fact is helping to define the new policy. VKPK.

2 pensamientos en “Politics of the blurring and disappearance: Google Street View and Microsoft Street Slide, within the limits of privacy.”