The latest series of photographs, The Ruins Of Detroit 2010 – the French group consisting of Yves Marchand & Romain Meffre – called doubly attention. On the one hand, the aesthetic look of beauty captured in each of the photographs, which record the deafening silence of the current state of neglect and ruin that has invaded and continues engulfing the city of Detroit. Photo achieved by the long exposure and careful lighting, where the predominance of shades of gray, blue, ocher and brown, it becomes a constant. Photographs, which in turn, fail to capture the quiet atmosphere of a brutally long held, that of the current bleak situation of abandonment of Detroit. A lengthy time, captured beautifully in Melted Clock, that takes us to a surreal dimension of abandonment, bridging the nostalgic images of De Chirico’s metaphysical period with stopped clocks and Dali, among many others.

On the other hand, the finding of real state of abandonment of a city belonging to the so-called first world, was once the cradle of the powerful automobile industry, becoming the fourth largest city in the United States. Submerged for decades in a deep crisis, due to the effects produced by the phenomenon of delocalization of industrial production systems, a fact noted by Alvin Toffler early.

As the authors relate, the most restless of the pictures is not dilapidated buildings, but faced with a landscape in which the state of abandonment seems to have occurred in rapid flight. Libraries full of books on their shelves, even furnished rooms, closets with clothes hanging quietly on their perches. A closest to the imaginary landscape of the diaspora caused by the imminence of a catastrophe, the result of a continuous process of abandonment caused by a prolonged economic crisis. 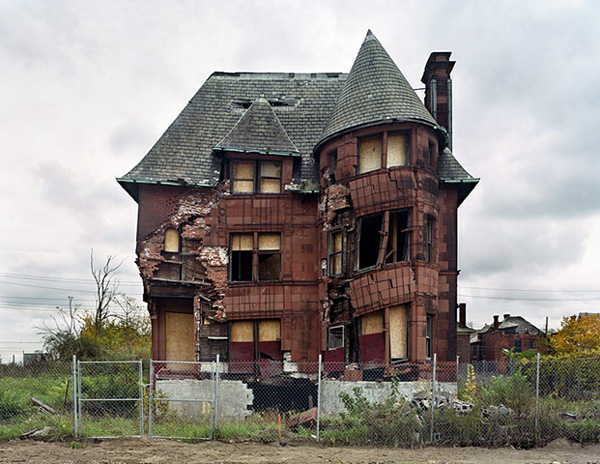 The escape of Henry Ford.

Among the photographs taken by artists Marchand & Meffre, highlights that records the William Livingstone House in Brush Park. A house built in French Renaissance style and is in an advanced state of deterioration. The picture was taken just days before the end of demolished house. Its architect was none other than Albert Kahn, the architect of Henry Ford.

And is that the history of the city of Detroit is inextricably linked to the automotive entrepreneur. In Detroit this industry owes its rise not only in the first half of the twentieth century, but its decline, when, after rising world oil prices and the massive influx of Japanese auto companies in the U.S. market seventies and eighties, led to the closure and abandonment of the major automakers.

But in 1913 the scene was very different when Henry Ford created the first major auto assembly line, employing 90,000 workers. It was in Detroit which gave birth to what would be one of the most famous car models of the century: Ford T – better known by their nicknames or Flivver Lizzie – and how well they would register John Steinbeck in his book «The Grapes of Wrath «.

But this was not only merit of the Ford. It was also important to a company like General Motors, which eventually became the largest private employer in the world, only surpassed by the Soviet Union.

Next to the baby boom of the automotive industry, came the real estate momentum and skyscrapers. Landmarks of that golden age were the Michigan Central Station, the National Bank of Detroit and theater UnitedArtists, all now in a state of complete abandonment.
While mid-century the city – which became the fourth largest in the United States – reached a population of over two million inhabitants, today it reaches a million.

Thus the flight of automotive companies, detonated many of the unresolved tensions in a racially diverse city. The city had received a strong migration of African Americans – who fled the Jim Crow laws – arrived in the city in search of better prospects. However, if the city were received for labor, held an exclusive social organization and white supremacy.

These tensions became untenable, to the point that in 1967 President Lyndon Johnson was the need to move from Vietnam to the Army’s 82nd Airborne Division, in order to appease the violent race riot that kept the city in a state war. Riots that left 43 dead as a result, 7,000 prisoners as well as a large number of homes and businesses looted and burned. These events were called whiteflight, consisting of the mass migration of white population to the suburbs, leaving the center occupied by an impoverished African-American population.

By the year 1973, Detroit chose what would be his first African American mayor, Coleman Young. Who devoted his last 20 years of public policy to deploy a series of revenge, the same expressed by calling himself as MFIC (mother fucker in charge, the son of a bitch in charge).

The arrival in Western markets of Japanese cars, meant to Detroit its ultimate downfall. Were years when the famous Rust Belt – industrial belt within which included Buffalo, Gary, Flint and Pittsburgh – was starting to subside. The 3 Big Famous – the name which referred to the industries of the Ford, Chrysler and General Motors – and that once came to make four out of five cars that were produced in the world, disappeared.

Today in Detroit seven out of ten murders remain unsolved, while nearly half the children are under the poverty level. Unemployment stands at 28%. Half of the schools have been closed and most of the stores and supermarkets, generating a state of widespread shortages for which he has earned the name of desert food.

In February, John Leonard a resident of the city of Detroit, created a Facebook page called build a statue of Robocop in Detroit. Initiative that sought-like monument to the character of Rocky raised in Philadelphia – raising once again the pride of the citizens, promoting the resurgence of Detroit (http://detroitneedsrobocop.com/).

The call is not left waiting and in just six days had raised $ 50,000 to fund the monument. Initiative has received support even from Peter Weller, actor who starred as the cyber-police.
Paul Verhoeven in 1987 premiere of the sci-fi movie Robocop, where he reproduced a Detroit ravaged by crime, unemployment and neglect. A dystopia, where the city was at the mercy of the corporation OCP (Omni Consumer Products). Which sought to destroy the old city to build in its place a mega real estate project, called «Delta City».

Today, reality and fiction seem to overlap in a city that is perhaps the last witness to an era dominated by Fordist growth model. A city that accounts for the last stage of capitalism yet linked to a territory. Capitalism from a world where everything had the consistency of iron, concrete and steel. 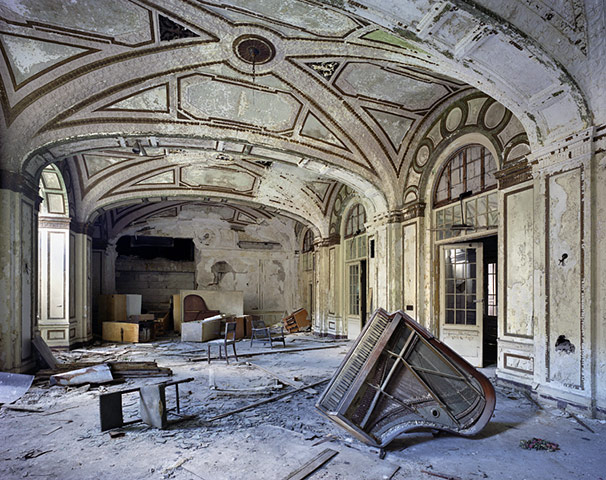 Rebecca Solnit in an article published in 2007 by Harper’s Magazine (http://harpers.org/archive/2007/07/0081594), related to the decline of the city of Detroit by the term «post-America» . For Solnit, in America there has been a transformation as that suffered by the city of Detroit, since the collapse of Maya civilization. Behavior although it has unique features – a combination of the worst of racism, along with the collapse of a mono-industrial sector producer – can be seen as a preview of what could be the fate of many cities on the planet. A scenario characterized by de-industrialization, de-colonization and depletion of resources. A scenario in which – and as an arcade redux – runs from the dismantling of all that has helped shape the urban environment. Thus returning to the cities to the zero degree, a state dominated by the deterioration and neglect. A scenario in which – unlike other cities destroyed by natural disasters – no possibility for reconstruction.