On Wednesday April 13, Peruvian writer and 2010 Nobel Prize in Literature, Mario Vargas Llosa (Arequipa, 1936) appeared in the great hall of the Headquarters of the Catholic University of Chile. Faced with a complete room – full of loyal readers and fans – Vargas Llosa discussed a topic that although not his specialty, appears repeatedly in his writing. For Vargas Llosa came to Chile to discuss the relationship between literature and city.

Brought to Chile as part of the series «The city and the words» – outreach activity organized by the Doctoral Program in Architecture and Urban Studies at the Catholic University of Chile and the tireless work of the cultural manager Loreto Villaroel – participation Peruvian writer joins notable previous visits. Julian Barnes, Michel Houellebecq, Alan Pauls, Richard Ford, Ian McEwan, Jonathan Franzen and Andreas Neumann, were just some of the writers called for – and from literature – talk, discuss and imagine the city.
Interviewed by Professor Fernando Pérez Oyarzun – who recently participated in the BAL 2011 in Pamplona – Vargas Llosa made a tour throughout his literary production, emphasizing the important role it plays in the construction of cities, fictions. For Vargas Llosa, the city invented both architects and planners, as the writers. Wherein the memory – built in part by the literature – is what prevails. Paris could not be understood without Victor Hugo, nor London without Dickens, Dostoyevsky Moscow without or without Ricardo Palma Lima.

Distance.
But to make possible the work of literature in the construction of that memory, it is sometimes necessary to work from a distance that gives the trip. The distance gives the necessary perspective. Nostalgia, memories, enhance certain images, overwriting the image of a city.
The working distance and a number of mechanisms, born from a relationship formed in part from the affection – positive or negative – and nostalgia, loss. It is only then that the writer’s pen can record the edge definition of neighborhoods, nooks and crannies.

Vargas Llosa has a complicated relationship with Lima, a relationship that can not be separated from his biography. For him, the city is always a personal matter. Discovered as a result of the encounter with a parent who remained absent during his childhood, Lima Vargas Llosa meant the discovery of life as an adult. In Lima discovered the loneliness, fear and violence. Thus Conversation in the Cathedral (1969), was written from that state of frustration and defeat. A disenchanted tone of those like the writer himself, not resigned to Peru during the dictatorship.

Fernando Perez, Lima read from Vargas Llosa’s work maintains a strong relationship with the sea, which is always present. For the Peruvian writer, this is a relationship that speaks more of a past situation, when neighborhoods like Miraflores and Barranco were considered spas. Life was far from the sea, a distance that Vargas Llosa was partly explained by the persistent fear of earthquakes and tsunamis that devastated the coast of Peru.
Today, Lima has been losing the fear of the sea, approaching. By moving the center toward the sea.
Huachafo world.

Vargas Llosa soon understood the limits of some tools in his youth largely inherited from French existentialist writers, for whom as Sartre aspects of life such as mood, were closed. A work of literature that would be assessed, must necessarily give a smile.
Vargas Llosa is how does record other rich part of modern life – such as the world of serials – from a key Peruvian deeply as is «cheap, sentimental.» By which means a special kind of corny, one imbued with a certain sentimentality. Huachafo vision of the world, through which reads all reality, including landscape and the city.
The world of cheap, sentimental Vargas Llosa is to the world of over-adjectives. The world of soap operas, telenovelas. One way of describing the world ironically. A look Vargas Llosa although not stated, has the smile of intense post-modernism. Construction of reality that acts as a phosphorescence, where and through the adjective, it set the world on the senses, activating an approach from and through the sensible qualities of things around us.
The look huachafo functions therefore as a counterpart to modernism, and its underside. A fosforescía activated, when the other is asleep or quiet. 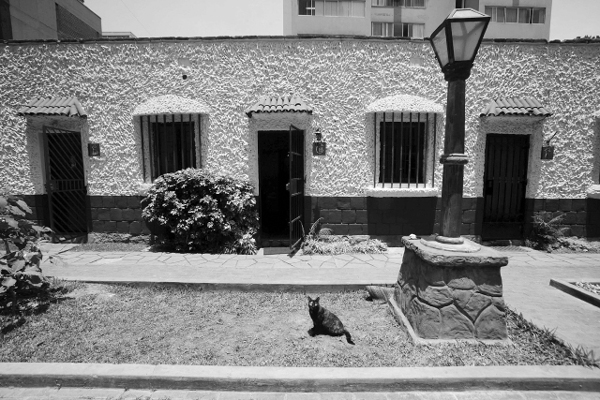 Vargas Llosa has a deep suspicion on the concept of «identity.» For him, a country with no identity, rather than a deficiency, is a value. The Peruvian writer identity, means a reverse search, a kind of «call of the tribe», which excludes the possibility of diversity, a country can be several things at once.
This is seen in Peru, whose territory is superimposed on a wide range of geographies and historical periods. By contrast, the defense of the concept of identity, acts as a counter-modernity, which seeks to define the peoples to fictions and constructions imagined by a minority of society.
These total-fictions or stories, are very close to the concept of utopia. That while for Vargas Llosa is not only possible – but even more – desirable in the field of artwork. Not so in other areas such as politics. Where utopias inevitably end up in the nightmare world building. Policy – and thus democracy – to Vargas Llosa is the field of mediocrity. Democracy unlike the work of art, does not seek perfection. Democracy is the rule of mediocrity.
Hence the pleasure he feels Vargas Llosa imperfect heroes, like Roger Casement (1864-1916), British consul in the Congo in the early twentieth century writer and friend of Joseph Conrad. Who was among the first who publicly denounced the atrocities of the colonial system in Africa, causing the collapse of the good conscience of the colonizers. This type of heroes prefers Vargas Llosa, more fallible humans so that they move away from the perfection that surrounds the national heroes constructed from official histories. Again mediocrity as perspective.

For Vargas Llosa the lives of others, is in the street life. And this is recorded mainly from journalism. Journalism is the means of relating to the present, whereby the life of the street enters and permeates life. Journalism for the writer is literature that suggests life.

Phosphorescence.
The possibility that the contemporary city is conceived, imagined, beyond the field of city professionals, gives clues about how you can adjust the tools modeled after a trade through which the city first of all is read and then – and only then – draw it. In a path that from fiction, fixed neighborhoods, places and landscapes. Leaving it to the memory that ultimately prevail. Memory, which for a world devoid of grand narratives, is perhaps a more urgent and pressing issue. A world in which literature serves as a glow, which adheres to the surfaces of our contemporary cities, illuminating our experience. VKPK.