The bottled crisis. Water Emergency and Contemporary city (Fukushima lessons) By: Gonzalo Carrasco Purull.
The days after the earthquake in Japan from March 11 lecture us not stop. Lessons have been taught in half a few months of really fast, where we spent the stupor of vertigo. A reality that seems to exceed the Match 1.
Fukushima last lesson seems to be about resources. And one very basic, elemental and ancient as is water. Given the recent announcements by the Japanese health authorities are saying that the radiation released from Fukushima has contaminated drinking water. Specifically through the presence of iodine 131, in quantities reaching a level of 210 becquerels per liter. Exceeding the recommended limit for children, which reaches only to 100 becquerels per liter. The presence of this substance is highly dangerous for children and pregnant women, the main threat thyroid cancer. Condition after Chernobyl was the leading cause of death of more than 6,000 people, by eating contaminated milk with high levels of iodine 131.

While adults still to iodine-131 levels present in drinking water do not exceed the recommended limits for adults (300 becquerels), uncertainty about the days ahead will be led to the Japanese population to deplete essentially all water bottled in the market. This is how the Japanese supermarket aisles – a few days ago proved to be enough supply – now look empty water bottles. While the latest reports speak of people charging through the streets of Tokyo between 20 to 30 ½ liter bottles, Nipponese authorities are considering importing bottled water during the coming days.
Fukushima again the crisis seems to be putting in evidence – and in the worst way – which are and will be key agenda items for the contemporary city. It’s no mystery that the urban water has been a growing problem for the planning and management of modern cities. Just to put some figures. Only if we consider the global consumption of bottled water, this has quadrupled between 1990 and 2005. As consumption in the United States only about 34 billion liters per year.
On the other hand, the last time was marked also by a strong questioning about the negative consequences of bottled water consumption. As the main criticisms that arising from the use of base plates made of PET (polyethylene Tereffalato), which requires high levels of energy to produce. United States alone, the plastic used to manufacture these bottles is estimated to have cost the equivalent of 15 million barrels of oil a year. Not to mention the cost and pollution involving transportation.

While this controversy was encouraging urban authorities to favor some other water distribution systems, the recent emergence of Fukushima bottled water has returned to center stage. And here you can become one of the main problems in the future, and that bottled water is emerging as the only safe water supply for a highly contaminated environment. This, as the radiation-contaminated water quickly spreads to the rest of the environment. And this in many ways, that go beyond direct consumption.
In Japan it is expected that water contaminated with iodine-131 is present in the coming days:

– In the groundwater.
– Through the rain upon the cities and farms. And the latter, to milk and whole food chain.
– Through the condensed water generated by residential air conditioning and humidity in the air. 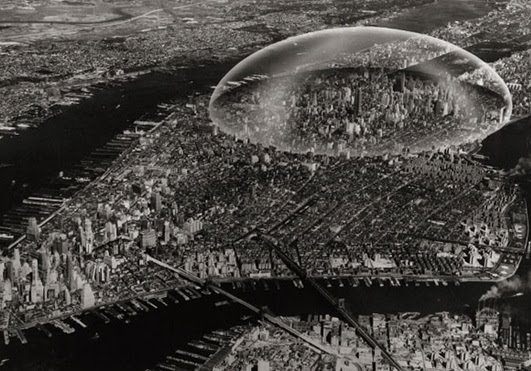 Thus the bottle appears not only as a temporary solution for the secure distribution of water to the population, but also as a metaphor in a way – the worst – of how we relate to a highly polluted urban environment.
The plastic bottle and the bubble thus seem to merge into a single image. Image similar to that conceived by Bucky Fuller on Manhattan, or better yet in the project for the Bay of Tokyo, designed in collaboration with Shoji Sadao. Where the architecture appears as the last refuge for a hostile environment such as assessed. VKPK.