Working from the disaster: Mutsuro Sasaki and structural behavior of the Mediatheque in Sendai for the earthquake of M-11. By: Gonzalo Carrasco Purull.

Within hours of the earthquake in Japan on March 11, is to start little by little to move the images that account for those first moments when the architecture lets you learn something sure to become a dangerous business, putting her upside down current property to provide shelter and protection.
In a society where access to newer communications technologies is an extremely widespread, not surprisingly, the enormous flow of personal records, through which the Japanese have been saved those moments where everything seems to fail. It is within these records, it highlights the engraving inside the seventh floor of the Sendai Mediatheque, one of the works of greatest impact to the architectural culture of the new century.
Designed by Japanese architect Toyo Ito, and calculated by the engineer Mutsuro Sasaki, the price of the media library buildings – as you can see in this video (http://www.youtube.com/watch?v=heh5ITmYbRs) – successfully passed the demanding test was the earthquake of 9.1 magnitude. But what made that while other structures were severely damaged and resulted Sendai Mediatheque unscathed? Perhaps the answer lies in the particular structural philosophy Sasaki own, for whom the role of the structural engineer does not have to be that of one who is opposed to the principles generated from the disaster. But instead, has to work from the entropy of the disaster itself, causing the structures to adapt to the complexity born from disorder to a contingency of space and time as an earthquake.
Sasaki is commissioned Sendai Mediatheque occurred just after the disastrous earthquake in Kobe in 1995, when more than ever they were required to Japanese engineers ethics of security in their structures. Sasaki had to contend from the beginning with an architectural design that looked very thin slabs, the main characteristic of open spaces designed by Toyo Ito. 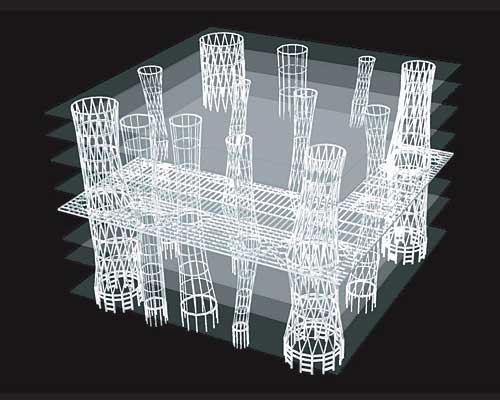 Sasaki’s first response was to offer a design based on the criteria of the traditional practice of anti-seismic structural design, as is the structure from slabs and beams of reinforced concrete. However, since the spatiality given by Toyo Ito did not admit the presence of beams, which concluded that the structural stability of the media library should rest solely on the slabs. But concrete built that its height would not be of not less than 70 centimeters.
Sasaki is well understood that the media library project involved not only a new conception of architectural space, but also a new way to approach the structural design. So we decided to first of all, to distinguish from their various requests, including two types of vertical structures. On the one hand, determined that the four corners structural tubes are the factors which are seismic loads, leaving the rest subject only to vertical loads. Each of these structural tubes designed strongly anchored to the floor of the basement, where a dissipation mechanism accounts for about 60 to 70 percent of the energy generated by the action of an earthquake.
In short, each of these structural tubes seven stories high was designed as independent structures, thereby freeing the slab horizontal stabilizer function. The same was designed from a network composed of steel beams 40 centimeters high, on which rests a layer of 7 inches of concrete is the finished floor. The structural grid is developed on a regular basis until the meeting with the structural tubes. At this point, Sasaki generates a ring around the pipe structural element which receives the beams through a transition zone, where the beams follow the path set by the natural lines of the charges.

For Sasaki, it was the behavior of the structure suggested that the design concepts and not brought from outside. This approach – which makes the disaster and the worst case scenario for a given structural design – appears in another of the elements of the media library, such as structural pipe corners. These are the only tubular columns which have been traced along a spiral curve: as a bamboo deformed by the wind. This shift in the structure is activated – is «complete» – only when the media library receives the action of an earthquake, preventing the rotation of the entire building. And the technology is applied to structural design Sasaki reaches completion only to a specific contingency of time and place, as is that of an earthquake.

This particular concept of design structure from the signals set by the performance of structures designed in the worst case scenario, meant for self Sasaki – and as he himself acknowledged – a turning point in his career as a professional by changing not only how it calculates its structures, but also on how the engineering and related advanced architectures. Thus, after the Mediatheque in Sendai, Sasaki participated in the design of the Tama Art Library – also in collaboration with Toyo Ito – and in the Louis Vuitton Omotesando by Jun Aoki, the 21st Century Museum of Contemporary Art in Ohio and the Toledo Museum of Art Glass Pavilion, SANAA.
If survival of the Imperial Hotel gave Frank Lloyd Wright of authority to the applied technology in architecture, it is expected that the structural behavior exhibited by the Sendai Mediatheque will at least debate on other ways of conceiving structures that cause the catastrophe, failure, entropy, are factors of the architecture, rather than scenarios that the architect relegated to the realm of the unthinkable.VKPK.