Slavery and vernacular techniques: paradoxes and reality in the case of brick makers in Afghanistan. By: Gonzalo Carrasco Purull.

Bernard Rudofsky became world famous when it enters the November 9, 1964 and February 7, 1965 presented an exhibition at MoMA titled with the controversial name of «Architecture without Architects.» Behind the project that led Rudofsky were the likes of Walter Gropius, Pietro Belluschi, Jose Lluis Sert, Richard Neutra, Gio Ponti, Kenzo Tange and the museum’s director, Rene D’Harnoncourt. The champions of international modern movement and alienated behind an exhibition that just tried to tell the story of these other architectures, away from the great biographies – or, as noted Rudofsky himself – an architecture without genealogy.
And like any Western which is presented with new territories, Rudofsky not even qualified her enthusiasm for architecture which seemed more honest, more real, more human than other architectures such a discipline born from the mid-sixties seemed exhausted. While the city appeared to Western eyes reflecting Rudofsky everything we alienated and did not allow us to live amid the beauty and communities. Vernacular settlements were displayed as places where the man had not only missed a stronger relationship with nature, but also what defines humanity.

The technology behind these architectures also appeared to be more appropriate, closer to the spiritual needs of man by encouraging the invention of the modern mechanical desire. This technology was resting in an immutable state, no improvement and perfection that made her «complete.» This same Rudofsky as already announced in the introduction to the catalog, when he says that «vernacular architecture does not follow the cycles of fashion. It is almost immutable, unbeatable, as it serves its purpose to perfection. »
However, something seems missing from the argument Rudofsky. And he himself makes clear to us, stating that «the wisdom that may arise beyond economic considerations and aesthetics, as it faces the most difficult and complicated of human society.» In other words, architecture without architects, is also not without economic processes and aesthetic schools. No closer to an architecture of the noble savage.
But here is where the devil comes back behind the wild Rousseau. This has been very respectful reported by photojournalist for the New York Times, Michael Kamber (http://www.kamberphoto.com/), who in a recent report titled «The Brickmakers of Afghanistan» (http://video .nytimes.com/video/2011/01/15/world/asia/1248069564413/afghanistan-kilns.html)
bare the sinister side of the core technologies of many vernacular architecture. Kamber traveled to the region near the border between Afghanistan and Pakistan, an area where poverty is a widespread and where the manufacture of bricks appears as one of the few ways of survival. And there the only requirement for working is to have two healthy arms, regardless of age. Kamber shows is how many children as Mohammad Neyaz eight years, began working from six o’clock in exchange for a few dollars a week. In the middle of the clay, trim silhouette of dozens of children, young and old by the hour, knead the clay, filling molds, dumped the clay still fresh and align the bricks to dry in a few like formations post-atomic Donald Judd. Making the most seemingly innocent material world, an object surrounded by shame.
To Kamber, the recent activation of military and terrorist operations in Afghanistan, with all its rate of destruction of buildings, not only will continue the product of human exploitation brick. But is will increase.
In the midst of an era of responsibility and risk, everything that appeared to have the sign of true and real, immutable and essential, seems to have flown over our heads, pointing the finger to all those cracks we try not to see. While we understand architecture as an autonomous discipline, far from the productive and political processes to which it relates, continue to live in the midst of a schizophrenic state. Where work is played in reality, keeping the architecture of the muses about a reality that sometimes gets messy, complex and desperate. 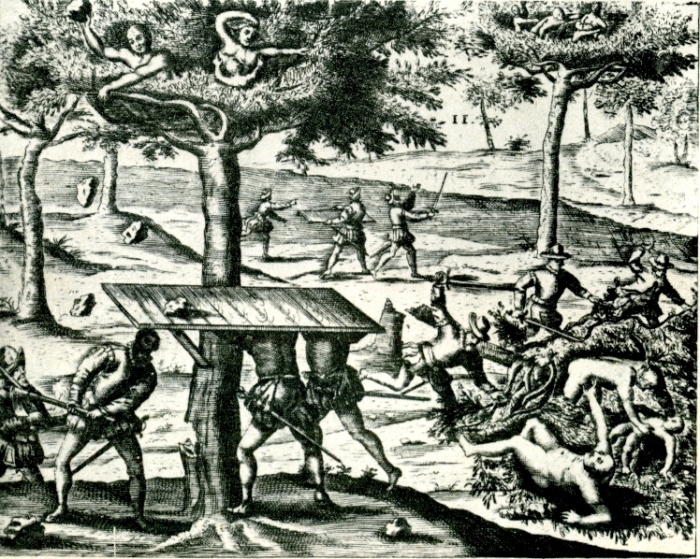 This duplicity schizophrenic autonomous architectures – as essential architecture Rufosky – are plotted in the same catalog. Through an intriguing cover image of Francisco Erasmo Lustgarten (1668). It sees the American people from the trees during the looting. In this image are quite primitive constructions that resemble the primitive hut Laugier identified as the source of all architecture. Where architecture to return to that first shelter building, approached the true derivative of the response to a certain set of needs. But if the image of the Lustgarten is disturbing, is that with this architecture born of honesty and truth, it happens the slaughter, the destruction that later result in exploitation. Architecture and raised – and contradicting Rudofsky – if you have to do with «economic considerations». Where the slaughter does not discriminate between low-tech or high-tech. VKPK